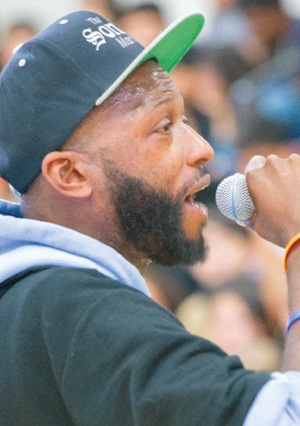 Mr. Glover’s story is an inspiration in itself. Born and raised along with two brothers by a single mom in Brooklyn, he strives to make something of himself and to give back to his community. He went through the New York City Public School system and is a graduate of Ithaca College. Mr. Glover teaches and conducts workshops/performances in Harlem, Queens, Brooklyn as well as teaching nationally and internationally in England, Canada, Netherlands, Bermuda, Prague, and more. He performed The Sonnet Man in Negril, Jamaica by special invitation from the Board of Education in the Soul Rebellion Hip Hop Festival.